Polaroid 600 AutoFocus – Wink Instead Of Sonar

The first Polaroid SX7o had a dial for a user to estimate the distance to their subject as a method to tell the camera what was in focus. After a short time, a split circle Range Finder focus solution was added to remove the guess work for focusing. Then, the ‘AutoFocus Sonar’ was added. It is recognizable by the large gold grill circle on the front of the camera. The Sonar focus system works by sending out a sound pulse then measuring how long it takes to get back to the camera to know the distance to focus to.

The 600 Series Polaroid have a variety of versions.

The basic 600 has no special focus, it is set to photograph things 4 feet and further away. 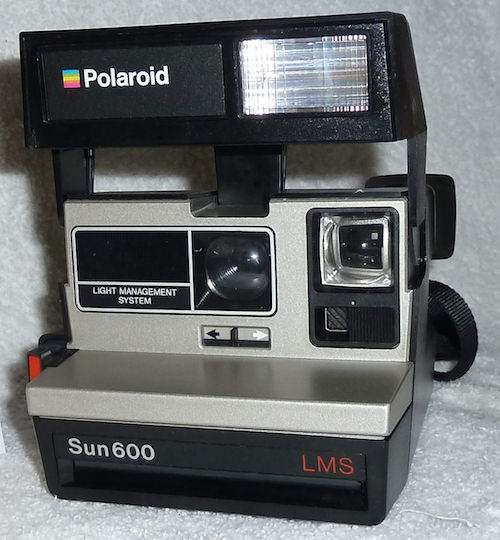 An updated 600 came with a Close Up lens (normally called the 636) which is manually slid over in front of the camera lens to better focus on item 2 feet to 4 feet away. 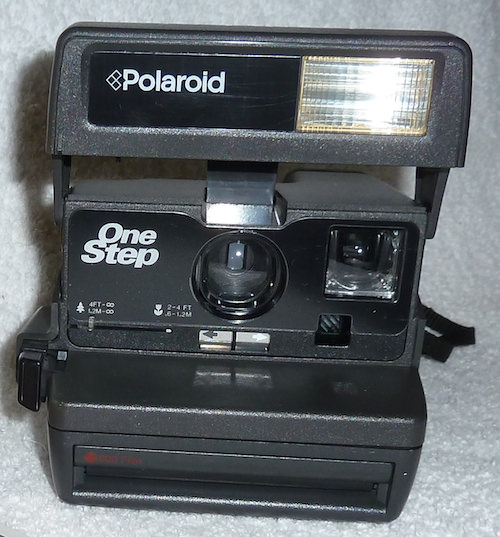 The ‘Pro’ version of the 600 (normally called the 660) had the large Sonar focus gold grid that automates pin point focusing. 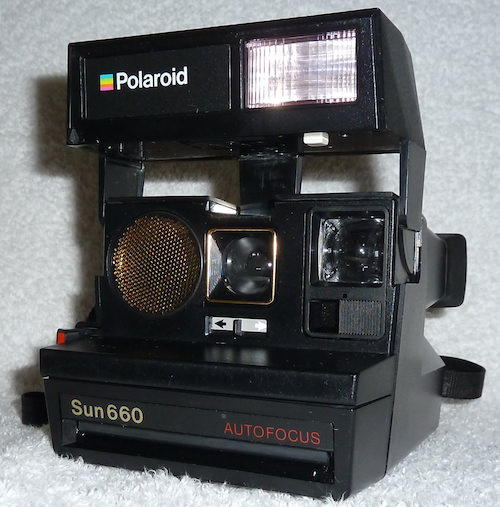 A less known 600 is the AutoFocus that does not have Sonar. It uses, though not mentioned anywhere in it’s literature, the ‘Wink’ focus method. 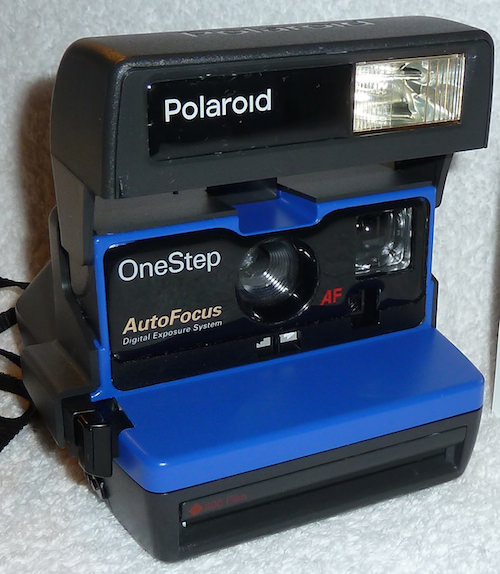 I spent a period of time trying to figure out how the auto focusing on this 600 worked. Pulling the cameras apart, searching my repair manuals. Finally, by shear luck, I came across the patent for the technology.  I say shear luck since Polaroid has a LOT of patents. In it, the system is highly detailed in tech and lawyer speak, it is a patent after all.

The Wink technology is an adjustment to the sensor that tells the camera if the flash is needed and how strong to flash the strobe. Rather than just watching for light bouncing, part of the sensor has a filter over it that restricts the light down to InfraRed which isn’t visible light. The problem with just using the light bouncing off an object is that it can be confused by colors, like a dark blue shirt vs a white sweater will be seen differently yet the two people are the same distance away. The IR sensor doesn’t see colors so it isn’t confused, rather it sees light not visible to the human eye so it can be used to calculate distance based on how long it takes the bounced light to return.

While a Polaroid camera appear outwardly as a simple camera, actually the strength and timing of the flash as well the time the shutter is open is all closely controlled. When you push the shutter, an internal timer starts for when the camera lens shutter will actually open. The flash starts to pulse, and the sensor starts watching the light coming back. If the light comes back really quickly, the flash lessens it’s brightness and the shutter fires quicker. If the sensor says it is dark, the time for the light takes a long time to come back, the flash goes long and the lens stays open longer. Sounds simple, but all of this is happening in hundred of milliseconds (the shutter fires automatically if it isn’t told differently at 124 ms, and the whole process won’t exceed 396 ms… wow!).

Since I doubt you will ever pull your Polaroid 600 apart, here is a couple photos you might find interesting. The first is the inside of a version of the camera that has the manual close up lens. The lens is part of the cover that is removed. What you can see here is in the center, just below the lens is a mechanical arm that is connected to the switch on the front of the camera which allows for the adjustment of light/dark backgrounds. On the right, you can see the filtering geared circle that controls the amount of light that reaches the sensor to vary how the camera take the picture. This is seen through a square on the front of the camera just below the viewfinder lens. 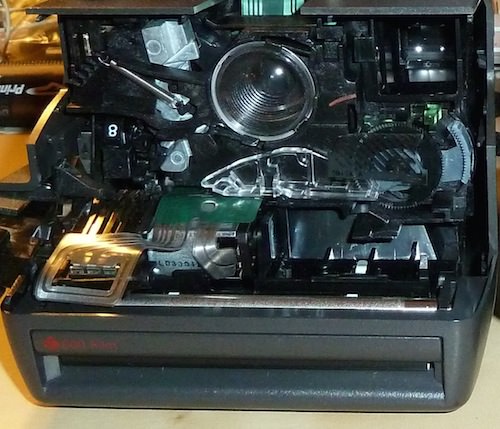 In the case of the (non-Sonar) AutoFocus Polaroid 600… oh, look at the electronics. The camera has moved away from the user actually manually adjusting things. Instead, when the light/dark slider on the front is moved, it is actually a three position switch that is moved. The white switch can be seen below and to the right of the lens. Moving the arm doesn’t move a filter, instead in this case it just tells the program that calculations need to be done to compensate for over light/dark backgrounds. 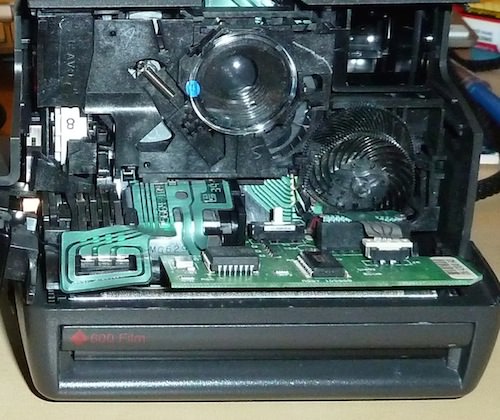