Sometimes, there is a need to pull a partially used film pack cartridge out of a Polaroid camera like a 600 series or SX70. It might be because the camera is having an issue, or you need to move the unused film to another camera.

I used to go into a zero light room and pull the cartridge out to put in a black bag or the other camera. Placing the cartridge in another camera, the camera auto ejects the top image… a waste of a print. My thought was that by just opening the camera film door, the film would be ruined.

Actually, opening the door doesn’t effect the film. With the door open, the trick is to insert the black card that ejects when a fresh film pack is initially put into the camera. It can be tricky to get the card over the upper most unused photo frame and under the case rail. But, it is possible, and by doing so the cartridge can be removed without loosing the use of a photo.

When you open the film door on your Polaroid, you will need to use the card to pull the thin black plastic lip back in order to see the print cards in the film cartridge.

Here is a video from The Impossible Project outlining the process to fix a sticky film issue. But, the removal steps are the same for what ever the reason you have.

Recently I have found that the first print out of the pack when I move it to another camera has the top of the photo print is nice and the rest is less perfect. It is always the first print only. It is leading me to believe that action of pushing the top card back in might be compromising the small chemical pack. If your doing this to test a camera works or not, it will give you that info. Otherwise though, if the top photo is a throw away, perhaps I will go back to swapping the pack in a dark room and having the top photo wasted as it gets ejected like the top card does. 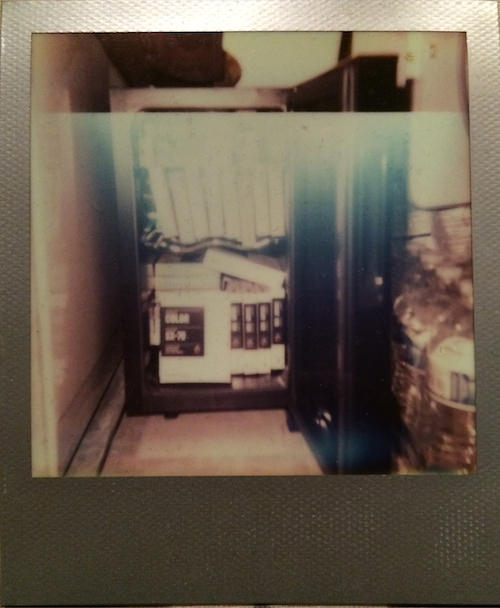 UPDATE – I have been having very good luck with using an old Polaroid print to slide in on top. It doesn’t seem to cause the next print to have any/much streaking, the camera pushes it out better when first loading the cartridge, and the corners don’t curl and scratch like using the original top card does.